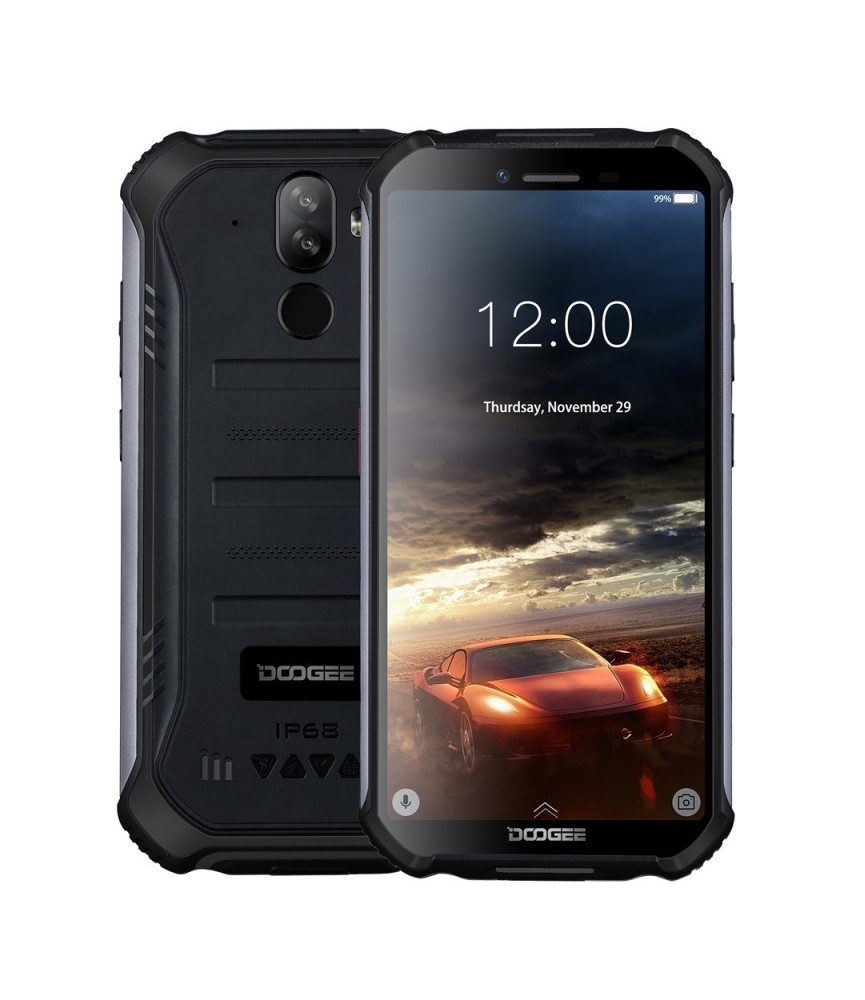 €99.17
✅ MIL-STD-810G military certification, as well as IP68 and IP69K protection making it more robust to shocks and bad weather.
✅ Class 4 glass protection (Corning Gorilla).
✅ Facial recognition and / or fingerprint for much safer security.
✅ An 18: 9 display on a 5.5 inch screen.
✅ 4650mAh capacity battery allowing better autonomy.
✅ Performance and stable operation thanks to the Quad core 1.3GhZ with 2Gb of RAM and and 16 Gb of ROM
✅ 3 year warranty (excluding accessories and batteries)
✅ After-sales service in France

At the same time, the design prevents water damage. Being a rugged cell phone, this is a strong feature of this device. This solid phone can also withstand bumps and drops to the ground. So you are free again without worries if you work in an outdoor environment.

At the same time, the design prevents water damage. Being a rugged phone, this is a common feature of this device. The all terrain phone comes with a healthy body that can also withstand shocks from falling into the ground. So you are free from worries again if you work in an outdoor environment.

It is a solid phone perfect for those working in heavy industries where the chances of falling are higher. Falling phones is a common phenomenon in our industries because workers cannot pay attention to their phones. In such a condition, you cannot find a better rugged and sturdy cell phone than this one.

The application of polycarbonate and metal plays a vital role in this solid cell phone. The manufacturer has added metals and other elements to make it a solid material with optimal performance. Even if the rugged cell phone falls, it will not have scratches on the screen. There is a corner protector which can prevent scratches.

The display of this solid cell phone is great. It comes with a 5.5 inch screen while the resolution is 480X 960 megapixels. So you can enjoy a wide variety of applications. Usually, rugged phones do not come with such a large screen or resolution. Therefore, you will only get specific benefits.

Multi-touch is the other feature of the screen that allows you to multitask. Most of these rugged phones do not have this functionality. So you get another advantage of modern smartphone with this device.

In addition, as this sturdy and solid cell phone works with the Android operating system, you can also enjoy other Android features with the screen. Watching clips or enjoying a movie isn't a big deal here. The screen style is also attractive, while the screen resolution will never be distorted.

The camera is another component that needs attention here. The front camera is 5MP while the rear camera is 8MP. They are sufficient to capture images in bad weather or in an oppressive industrial environment.

Another addition to this communication device is the LED flash. You can have the brightest flash with the LEDs installed in this mobile phone. But other similar phones don't offer the same functionality.

Now let's discuss the battery. Remember that this is a special sturdy and solid cell phone and therefore the battery is very durable. The battery comes with 4650mAh. So you no longer have to worry about charging the phone like other smartphones

Most importantly, the battery requires less charge but provides an optimal level of backup. The battery is not removable.

The overall performance is also up to par.

The Doogee S40 Lite waterproof smartphone is an Android device, and you can also upgrade the version to the next level. After unpacking the device, you will see it working with Android OS v9.0 (Pie). For ideal performance, it comes with the Mediatek MT6580M chipset.

Interestingly, the device's processor is a 1.3 GHz quad-core Cortex-A7 with the Mali-400 MP2 GPU. If you have a clue about the CPU and GPU, you will realize how fast the device is working. In fact, you can use the phone with all the features during all months of the year.

The device is also IP68 certified for its dustproof and waterproof characteristics.

The rugged and solid Doogee S40 Lite mobile phone comes with 2 GB of RAM. RAM is not expandable. In addition, its internal memory or ROM is 16 GB and this is enough for an all-terrain smartphone in this category.

On the other hand, the device comes with a built-in GPS receiver. So, if you are looking for the navigation option in an unknown street or place, you can quickly get GPS support.

It can also transfer and receive data and content from near-field communication devices.

The radio receiver is the other advantage to make it an essential solid cell phone. You can spend your quiet hours listening to your favorite channels.

This robust mobile also supports 2G / 3G and 4G mobile networks in accordance with GSM 850/900/1800/1900. You can also connect it via wireless connection like Wi-Fi, Bluetooth, among others.

Using the proximity sensor, the screen turns off when it is close to your face. It is also another way to reduce battery consumption. In addition, there is a compass on the rugged cell phone to determine directions.